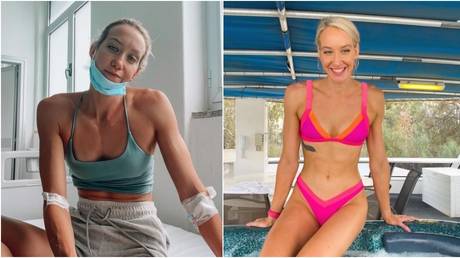 Australian Olympic double gold medalist Madison Wilson has admitted she is ‘scared’ after being hospitalized in Italy with Covid-19. In a message to followers, Wilson confirmed she was double-vaccinated and promised to bounce again.

Wilson was a part of the Australian 4x100m ladies’s freestyle relay group which received gold on the Tokyo Olympics through the summer time.

The 27-year-old star is at the moment in Naples, Italy, the place she was as a result of compete with the Los Angeles Present within the Worldwide Swim League (ISL).

However as Madison revealed from her hospital mattress, these plans have been scuppered by her Covid an infection.

“I lately examined optimistic for Covid and yesterday was moved into hospital for additional care and statement,” wrote Wilson in an Instagram message.

“Despite the fact that I’m double vaccinated and took the precise precaution set in place by way of the ISL, I’ve managed to fall to this virus.

“It’s been a loopy few months and I imagine being run down bodily and mentally could have made me extra inclined.

“I really feel extraordinarily unfortunate however I do imagine this can be a large get up name, Covid is a critical factor and when it comes it hits very exhausting. I’d be silly to not say I wasn’t scared,” the star added.

Wilson acknowledged that she was “taking a while to relaxation” however was positive she could be “able to bounce again very quickly.”

Prime US swimming coach David Marsh was amongst these to want Wilson properly, writing: “Keep sturdy Madi – you’ll be again crushing it once more quickly.”

Madison Wilson and Campbell had been a part of the Australian group which received gold in Tokyo within the 4x100m freestyle relay.

Wilson swam within the heats and was not a part of the group which competed within the last, however nonetheless picked up a gold medal for her efforts.

The Queensland-born star additionally received gold in the identical occasion as a part of the Aussie group on the Rio Video games in 2016, in addition to choosing up a silver within the 4x100m medley relay in Brazil.